Kim Davies Hoffman is a tireless instruction & reference librarian, a valuable team player, a careful mentor, and, as of last spring, Coordinator of Instruction & Reference Services at Milne Library. Kim has risen through the ranks fairly quickly during her 12 years as a SUNY librarian (nearly all that time at Geneseo) and was promoted to Full Librarian on Sept. 1 this year. Of her professional growth in that time, she says, “There has definitely been a shift from learning and doing to guiding, mentoring and leading.”

With her extensive list of college committee memberships and outreach efforts, it’s a fair bet that Kim is familiar to many people on this campus, especially the faculty and students in the academic departments she serves as liaison – Anthropology, Sociology and Foreign Languages.  She has taught hundreds of information literacy and research skills classes over the years, but perhaps her most important and fulfilling contribution has been in collaborating with individual professors to integrate long-term, intensive and progressive library instruction within their courses. Her collaborators have included Ellen Kintz (Anthropology), Elaine Cleeton (Sociology) and Cristina Rowley (Spanish), to name just a few.

Kim’s professional reputation extends well beyond Geneseo, through the many presentations she has made at local, state and national conferences, as well as through articles she has written (or co-written), committee memberships and positions she has held, and programs she has been instrumental in creating. It is possible to list only a few here.  “My preference for professional committee work is on a local scale, she says.  “I have been able to make much more of an impact on my fellow colleagues and the profession overall than I would serving as a mere number within a larger national organization.”

In the SUNY Librarians Association (SUNYLA),  Kim served  for five years as Chair of Membership Development Committee, from which sprang MEOW (Membership Enthusiasm and Outreach Workgroup) which Kim helped form

with a few other librarians who were frustrated with the lack of participation in SUNYLA. She also served as Chair of the Working Group for Information Literacy and in that capacity worked with fellow Milne librarian Michelle Costello to design and host a one-day interactive workshop entitled Library Instruction: Teaching Tips from the Trenches, in January 2009. That workshop led to a similar one hosted at the University of Albany plus a follow-up pre-conference workshop at the SUNYLA annual conference, also in 2009. The program evolved, with the help of a $3,500 grant, into LILAC, the acclaimed Library Instruction Leadership Academy. For their work, Kim and Michelle were recognized by the Association of College and Research Libraries (ACRL) with its 2011 Instruction Section (IS) Innovation award. 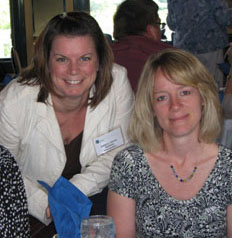 Among the several other awards Kim has received are the Friend of SUNYLA award and the (SUNY) Chancellor’s Award for Excellence in Librarianship.

So where did she come from?  Shortly after she was born, in England, Kim and her family moved to Canada where she lived for the next ten years before moving permanently to the U.S. (she has dual British-U.S. citizenship). She has lived for two years in France, as well – studying abroad in Dijon for a year, and, soon after, for another year as a teaching assistant in Paris. She earned a BA in French and International Affairs from the University of New Hampshire and, after receiving an MLS from the University of Buffalo in 1997, took off for New Orleans, working first in the public library system and then at the University of New Orleans.  When NOLA’s heat and humidity drove her back north, Kim found a part-time librarian position at SUNY Fredonia (which she supplemented as a barista at Starbucks), until she landed a full-time job as a librarian at UB’s Health Sciences Library. By late summer 1999 Kim was hired by Milne Library as a reference & instruction (with a side of government documents) librarian.  She hit the ground running and hasn’t slowed down since.

As for where she is going from here, her priorities lay, as usual, with finding new and creative ways to increase information literacy among the students – and faculty – at Geneseo, in an increasingly online world.  As Coordinator of Instruction & Reference Service, she will work to refine assessment of the library’s instruction program, not only to prove what she and many others already know – that it IS effective – but to enable it to become even better.  And plans are well underway for LILAC2, which will help empower a fresh crop of new library instructors to “teach it forward.” Citing a commitment to lead by example as one of her greatest strengths, Kim says “The opportunity to co-teach with novice librarians allows me to share my understanding of pedagogical theory and practice without appearing lofty and without exposing their insecurity or uncertainty about teaching.”  She adds, “My fearlessness in the classroom opens the door for others to experiment with new ideas and technology.”

Gandy Dancer is proud to announce their sixteenth

Willing to be part of this book group discussion?