The YALSA (Young Adult Library Services Association) Youth Media Awards were announced last week, and represent a fantastic group of books! Give your brain a break from articles and textbooks and pick up one of these great reads! The Alex Award honors a book written for adults, but that has wide appeal for teens and younger adult readers. Two of the winners this year are available here in the library:

Mr Penumbra’s 24-hour Bookstore by Robin Sloan
“The Great Recession has shuffled Clay Jannon out of his life as a San Francisco Web-design drone—and serendipity, sheer curiosity, and the ability to climb a ladder like a monkey has landed him a new gig working the night shift at Mr. Penumbra’s 24-Hour Bookstore. But after just a few days on the job, Clay begins to realize that this store is even more curious than the name suggests.” (see Milne Librarian Kate Pitcher’s recent review here…)

The Round House by Louis Erdrich
“One Sunday in the spring of 1988, a woman living on a reservation in North Dakota is attacked. The details of the crime are slow to surface as Geraldine Coutts is traumatized and reluctant to relive or reveal what happened, either to the police or to her husband, Bazil, and thirteen-year-old son, Joe. In one day, Joe’s life is irrevocably transformed. He tries to heal his mother, but she will not leave her bed and slips into an abyss of solitude. Increasingly alone, Joe finds himself thrust prematurely into an adult world for which he is ill prepared.”

YALSA Award for excellence in nonfiction honored the book Bomb: The Race to Build – and Steal- the World’s Most Dangerous Weapon by Steve Sheinkin. This book is available through IDS.  Titanic: Voices from the Disaster by Deborah Hopkinson was a honored book and is available here in Milne Library.

William C. Morris YA Debut Award is exciting as it honors an author who has published their first novel. This award always brings out new and noteworthy voices and are definitely worth a read. 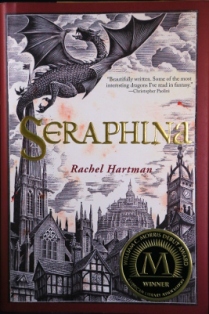 This year the winner was:
Seraphina by Rachel Hartman
“In her New York Times bestselling debut, Rachel Hartman introduces mathematical dragons in an alternative-medieval world to fantasy and science-fiction readers of all ages. Eragon-author Christopher Paolini calls them, ‘Some of the most interesting dragons I’ve read in fantasy.’”

The Michael L. Printz Award acknowledges books that “exemplify literary excellence”. This year’s winner, available through IDS was In Darkness by Nick Lake, a gripping novel about a young Haitian boy in the midst of the devastating earthquake. Last year featured John Corey Whaley’s Where Things Come Back that tells the story of an Arkansas teen navigating life in a small town during his brother’s disappearance and the reappearance of an extinct woodpecker.

Check out YALSA’s full list of awards and winners for more great recommendations!